In southwest Germany, central Switzerland, and eastern France large burial mounds containing
richly furnished graves were laid out in the 6th and 5th centuries B.C. Shortly after the first
explorations of these in the 19th century, the magnificent burials began to be connected to early
Celtic “princes”, a concept that eventually became accepted.

Most of the large burial mounds are grouped around fortified hilltop settlements, the
“princely residences.” It was concluded that larger areas were dominated politically and
economically from these locations.

One of these princely residences is the Hohenasperg , around which some of the typical
monumental burial mounds are located. Earlier excavations revealed however that the
burial mounds had already been robbed and plundered.

For this reason the discovery of the Hochdorf princely grave represents a fortunate exception.
Over the course of centuries, the burial mound was worn away but the grave within lay undisturbed. 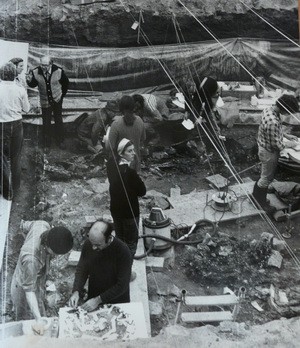 View of the burial chamber during
the excavation.

Beginning in 1968 the volunteer representative of the Landesdenkmalamt (State Antiquities and Monuments Office) Baden-Württemberg, Renate Leibfried, kept coming across stone fragments plowed up in the field. Thanks to her alertness, the Archaeological Preservation Office took a closer look at the discovery site and identified what had formerly been a large burial mound. Due to the acute danger from agricultural use, the burial mound was completely excavated during the years 1978 and 1979 under the leadership of Dr. Jörg Biel of the Landesdenkmalamt (State Antiquities and Monuments Office) Baden-Württemberg. The digging was carried out with the most modern research methods then available. The relatively late discovery of the princely burial would become a fortunate exception for archaeological research.


The Task for Archaeology


Traces of human activity have been preserved in the soil for thousands of years. From the information
given by discoveries and finds, archaeologists attempt to reconstruct the society, the way of life, the environment, and the history of our ancestors. A prerequisite for that is the detailed documentation
of discoveries and finds: exact location, photos and drawings, precise description and careful removal.
Only this will provide the evidence of a site that no longer exists since each scientific excavation also
entails the destruction of that site. The scientific evaluation of an archaeological excavation is supported
by the documentation of the discoveries, observations during the restoration of the finds, and various scientific investigations. Therefore animal bones or botanical remains are often more revealing than spectacular gold discoveries. The numerous individual data are compared to what is already known and finally fit together like pieces of a mosaic to form a complete historical picture, changing or verifying it.